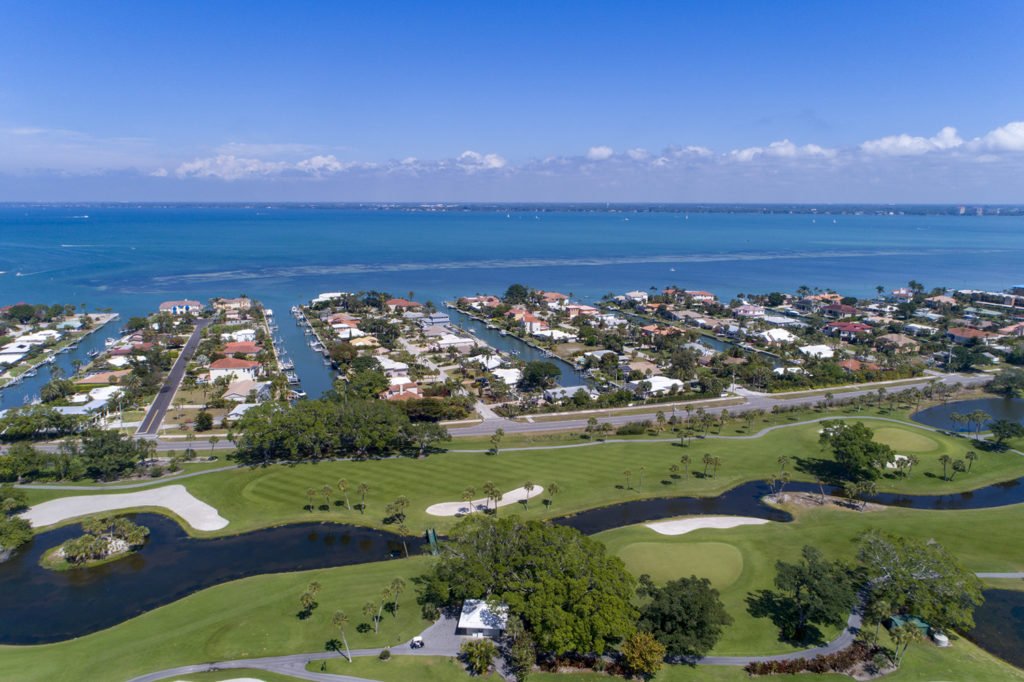 In the early 1960s, the Arvida Corporation transformed the Sarasota Bay area in impressive ways and created Country Club Shores on the southern bayside of Longboat Key.

This classic waterfront community is one of the most sought-after locations on the island. Country Club Shores was intended to be a boater’s paradise from the get-go. Arvida dredged 18 parallel channels with 19 streets thrusting into the bay like the teeth of a long comb. As a result, nearly all of the homes back onto the canals or have spectacular bayside views of downtown Sarasota. Private docks accommodating 30- to 40-foot yachts offer sheltered mooring for just about every resident. New Pass just to the south provides easy access to the Gulf of Mexico.

Many of the older residences have been restored or replaced and homes that front the bay offer sweeping views of the Sarasota skyline. Deeded beach access is available to all the residents while the shopping and dining of both St. Armands Circle and downtown Sarasota are only moments away.  The street names are an interesting mix of golf and marine names like Cutter, Yawl, Yardham, Wedge, Spinnaker, Sloop, Schooner, Ranger, Putting Green, Putter, Outrigger, Ketch, Hornblower, Halyard, Gunwale, Golf Links, Chipping, Bowspirit, Bogey, and Birdie.

The community was built in five phases, starting at Sloop Lane and ending at Putter Lane at the northern end. In the first three developments, the lanes branch directly off Gulf of Mexico Drive. The last two developments have separate entrances with signage.

The 396 homes of Country Club Shores represent one of the few single-family neighborhoods on Longboat Key. Configurations for Country Club Shores homes for sale typically run from 2 bedroom, 2 bath ranch to 5 bedroom, 5 bath mansions with floor plans measuring around 1,670 to over 6,000 luxurious square feet.  With large palm trees and lush landscaping throughout, a distinct old Florida atmosphere makes for a quiet, easy-going lifestyle.